“Not only does the AIR.U deployment improve wireless connectivity for the Public Rapid Transport System, but it also demonstrates the real potential of innovation and new technologies to deliver broadband coverage and capacity to rural areas and small towns to drive economic development and quality of life, and to compete with the rest of the world in the knowledge economy.” –John Campbell, Chief Information Officer, West Virginia University 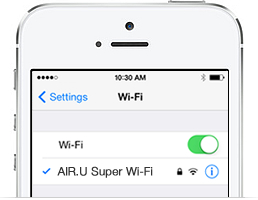 What is White Spaces technology?

In September of 2010, the FCC issued its Second Memorandum & Order allowing the unlicensed operation of devices in the unused portions of the TV Broadcast Bands, known as White Spaces. Open access to White Spaces is a significant event due to the considerable amount of spectrum allocated, coupled with the superior propagation characteristics associated with their lower frequency range (54-698 MHz).