The Broadband Communities Summit attracts broadband system operators, network builders and deployers of all kinds. The conference brings together broadband advocates from across the states to become informed on government programs and pending legislation, industry best practices and connect with other interested parties from local communities, state and federal governments and industry participants.  Many of the Country’s major property owners and real estate developers attend the Summit each year, along with independent telcos and cable companies, municipal and state officials, community leaders and economic development professionals.

In October 2016, DNG deployed a state-of-the art broadband network in Garrett County, the westernmost county in the state of Maryland.  The initiative was developed by Garrett County and partially funded by a matching grant from the Appalachian Regional Commission (ARC).  The cooperative model pairs the County with DNG as its private partner to evolve the infrastructure needed to deliver high speed Internet services to unserved or underserved homes and businesses in targeted areas of the County. 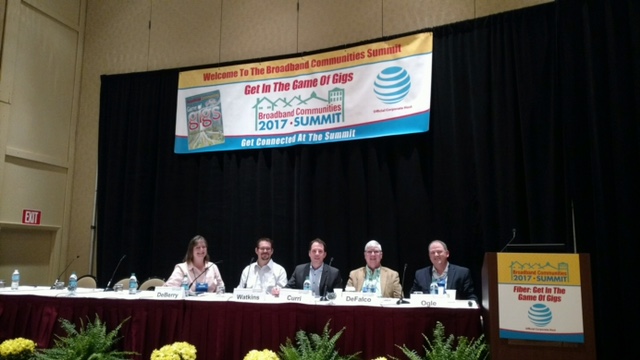 At the Broadband Communities Summit, Eric Ogle, Treasurer of the Rural Telecommunications Congress, moderated a panel, “Broadband is the New Coal: How Appalachia is Tackling Broadband.”  The genesis of this discussed centered on what the Appalachian Regional Commission has done to spur the development of broadband and technology-based economic development to help offset the loss of the coal economy in communities from Pennsylvania, Maryland to Tennessee. Mark DeFalco, Manager of the Appalachian Regional Commission, along with Nathaniel Watkins, CIO of Garrett County, and Cheryl DeBerry, Natural Resources Business Specialist for Garrett County, participated in the panel.

DeBerry remarked, ““Today’s economy requires a connected community, and rural areas are often left behind.  Garrett County Government is committed to finding a way to extend essential broadband service to as many of our rural businesses and residents as possible.  Our use of wireless technology in partnership with DNG is allowing us to fulfill that commitment in remote, unserved areas of our county.”  DNG, under the brand name of NeuBeam™, has already built out its network to several areas of Garrett County with additional expansion planned for this year.